Fostering to Adopt: The Journey Continues 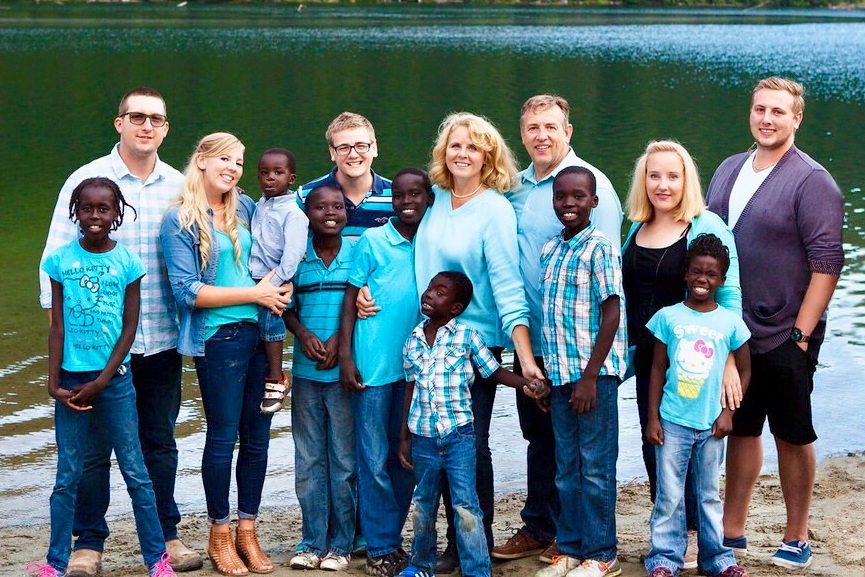 Six years ago, our lives were changed forever when we received our first-ever foster placement, a sibling set of four children between the ages of six and nine. We soon discovered that these four siblings had already been in foster care for more than five years, and needed a forever family. Our four biological children, between the ages of 15 and 20 at the time, we’re excited about growing our family. So together we decided to have these children become a permanent addition to our home.

However, we also discovered that there were three more siblings in this family and the seven siblings had been living in three separate foster homes. At that time, their social workers first approached us to consider taking in and adopting all seven siblings, an offer which we initially declined. However, we wanted these children to be able to see their siblings and immediately set up regular visitation in our home. Studies demonstrate that there are many benefits for kids in care who can maintain relationships with their siblings.

Although we were fairly confident in our parenting skills (although far from perfect :)), we (and our family and friends) thought the plan to add all seven siblings to our home and family, especially when each of them had special needs, would be too crazy and too stressful. The transition of the first four children had not been a smooth journey, as there are typically many challenging behaviours to deal with in connection to trauma and attachment issues. If you have not yet seen it, I would encourage you to watch the movie “Instant Family,” to see a fairly authentic picture of what life is typically like for parents who adopt foster children as they try to discover a new normal for their growing family. Clearly, the road from fostering to adoption is sometimes bumpy. These parents often need a lot of support. Even if you do not feel called to adopt, I will encourage you to take the time and effort to support someone else who has taken on this journey. I truly believe that “it takes a village to raise a child.”

However, another year passed by, and the social workers were unsuccessful in their search for a forever family for the three younger siblings. In the meantime, we started to wonder if perhaps adding all seven children to our family could work. We were feeling optimistic about the successes which our first four adopted children were experiencing. We were hopeful that if providing a forever family could have such a significant impact on the older four siblings, perhaps we could also make a difference in the lives of the youngest three children.

We knew that the siblings all longed to be living together in the same home with the same family. A lot of the children’s behaviours were settling down, as we expanded our knowledge about how to best support and parent children with trauma and attachment issues. We realized time was quickly passing by, and these three younger children were in limbo. Although we had some anxiety about what it would look like to adopt the three younger ones, we were more afraid of what would happen to these children if no one took the risk to love them. Therefore, our family met, and we talked about the possibilities, and together we decided to add the youngest three children to our forever family.

We immediately took a Safe Babies training course, emptied our bank account to purchase a crib and more beds and car seats, in addition to a 12-passenger van. In 2015, we began to implement the permanency plan, and the two-year-old and four-year-old brothers moved into our home. Six months later, their six-year-old sister joined our family.

If you had told me six years ago what my life would be like today, I would not have believed you. If you had said to me six years ago that I would have adopted seven children with special needs, in addition to having four biological children and two grandchildren, I would probably have said that you were crazy and that I would never have the courage to do something like this. It is true this journey is hard. We have often been stretched to our limits. When we signed up for it, we never imagined beautiful children from hard places would take so much out of us or be so exhausting. But that’s what real love is all about.

Our children have come from some hard stuff and their ability to love back, and give back, is often gone, or in short supply. There are reasons why our kids have hurled curses at us, pinched, bit, hit, kicked or spit on us, their teachers, EAs, or anyone they came in contact with. It’s not their fault. However, as Ella Fitzgerald once said, “it doesn’t matter where you came from, it’s where you are going that counts.” We believe that part of our job is to help our children understand that even though their past didn’t turn out the way they wanted it to, their future can be better than they ever imagined.

Our youngest child is now five years old. When he was about two years old, he noticed we had different coloured skin. He said “Look, Mommy! I’m chocolate, and you’re’ nilla!’ (vanilla). I told him “Our skin doesn’t match, but our hearts do.” However, I do believe that if all the world could see people’s differences as ice cream flavours as he did, the world might be a better place.

Lately, this same five-year-old son has become intrigued with the idea of where babies come from, because of family members who have been pregnant and given birth. He concluded that all babies come from their mommy’s tummy and therefore he must have come from my tummy. He then started telling people “I remember when I was a little baby inside Mommy’s tummy, and Daddy took her to the hospital and then I came out.” We realized it was time to have “the talk” and explain to him that he has two mommies because he came out of his birth mother’s tummy. We showed him a picture of his birth mom, and he was surprised to learn that she was chocolate too. I then told him that he is adopted, and that adoption is when babies grow first in one mummy’s tummy, and then they grow in their other mommy’s heart.

After our last child was adopted, we had a big family celebration. We handed out “Survivor” buffs to signify that we were all merging as one tribe, “Survivor” style. We then handed out goodie bags which each held a pair of bright coloured warm fuzzy socks. We told our kids these were symbolic of how each of us in the family is different, yet the same. We each are colourful in our own way, yet the strong bonds of “warm fuzzies” and love connect us all. Then we had a giant dance party to end the celebration. 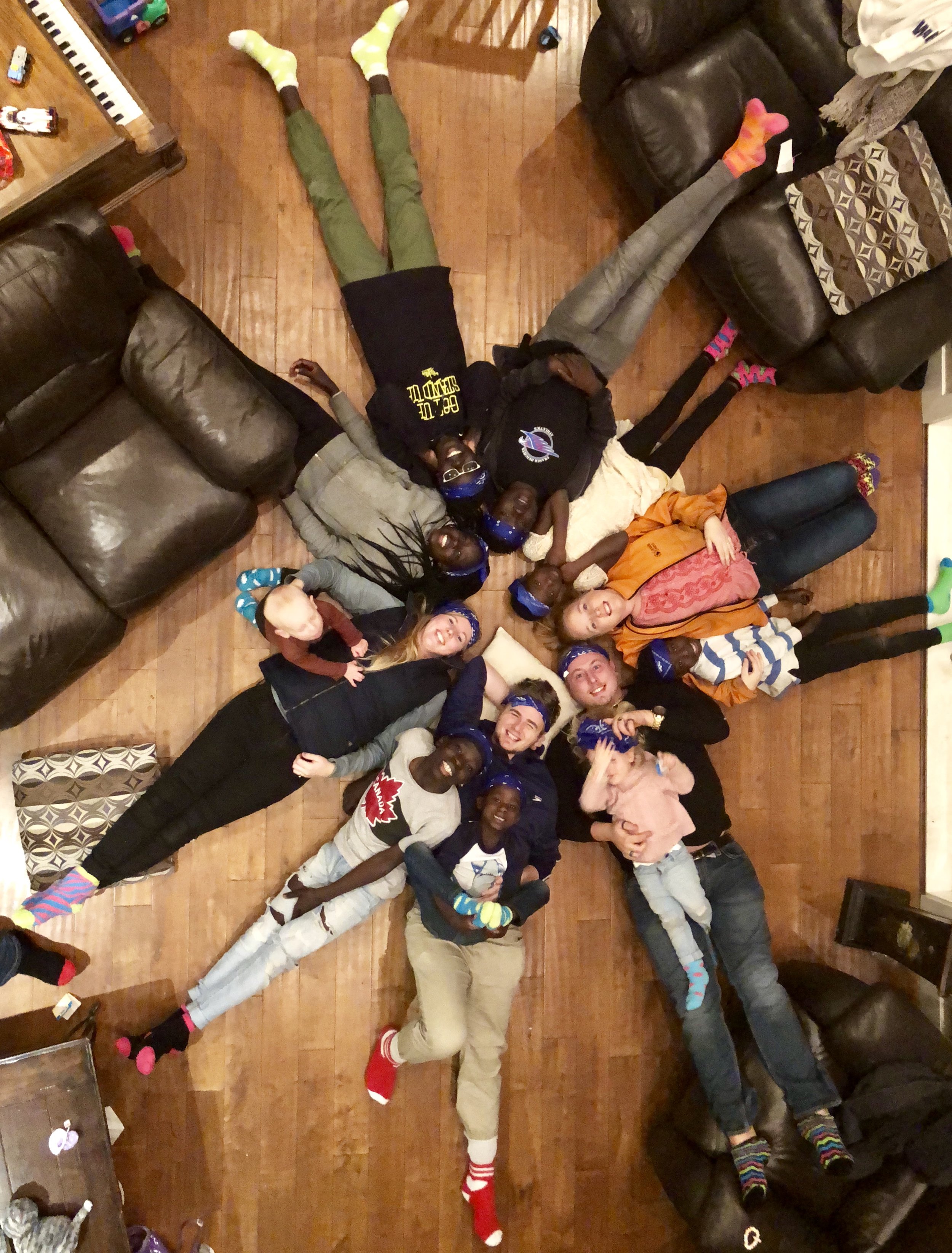 People often stop and stare at our family and make comments about how we really have our hands full. Sometimes, we say “If you think our hands are full, you should see our hearts.”

We have seen what love can do. In the past six years, we have seen our youngest seven children transformed in so many different ways. And we ourselves have been transformed. If there was ever a cause worth fighting for, it’s this: children belong in families.

Looking back on our journey, we acknowledge that we have gone through endless challenges and have had many sleepless nights. In spite of all of that, this journey is worthwhile; we have no regrets. We love our children deeply. We did not need to know what the last six years would hold; we just needed to take the first step towards adoption in faith. Martin Luther King Jr said, “Take the first step in faith. You don’t have to see the whole staircase, just take the first step”.

Every child needs a family who will stand by them through thick and thin, in good times and in bad. For example, on the day of our five-year-old son’s birthday party, we had to cancel the party because he had to be admitted to the hospital with a serious condition. Over the next two weeks, he was never alone in the hospital because his parents and adult siblings took turns staying with him. Not only did his family show up for him there, but they made sure he was still able to have his superhero birthday, and they all showed up to the party in superhero costumes. That’s what it means when you have a family who has your back and is always there for you. Every child deserves a family who is there for them always. Period.

Emma Mild-on, a well-known international columnist, author and publicist who speaks about adoption, wrote: “I don’t think roots are as important to a child as wings are.”

We believe that God knit our children together in their birth mother’s womb, and then He wove them into our hearts. We may not have given them the gift of life, but life gave us the gift of them. We were called to do this. And in time, the love we pour out for them will take root. And as we continue to provide the love and support our children need, it will give them wings.

Sign up to our newsletter and receive this FREE eBook: